You’ve Been Accused of a Military Crime. Now What? 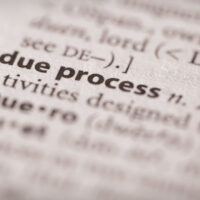 A lot happens in the span of time between being accused of a crime and being charged with a crime. This pre-preferral period, as it’s called, is where the military law enforcement agency (CID, NCIS, or OSI) investigates the accuser’s claims, and your chain of command gets its ducks in a row to begin the court-martial process or other disciplinary action. The two posts following this one look at the issue of pretrial confinement and the investigative process that takes place during this period. In this one, we want to talk about the pre-preferral process overall.

The person who accuses you of a crime—theft, assault or sexual assault, harassment, or anything else—may report the accusation to any number of people: a civilian law enforcement officer, a military law enforcement officer, his/her commanding officer. Whichever officer receives the report will immediately notify your chain of command of the accusation.

Regardless of how much they respect you, your commanding officers have no choice but to follow due process once an accusation is received. That process includes limited authority to handle (“dispose of”) cases themselves without a court-martial. This can only happen with relatively minor offenses. In the case of a sexual assault allegation, only a few officers with an 0-6 rank have the authority to dispose of the matter.

Assuming the matter is not disposed of out of hand, the first thing your commanding officer will do upon notice of an accusation is “flag” you. A flag makes you ineligible for promotion, re-enlistment, retirement, or enrollment at a military school. Essentially, a flag puts your career on hold for the duration of the disciplinary process.

This is frustrating, but the process is there for a reason; it’s the law, and there’s nothing you can do about it. Don’t try to plead your innocence with your C.O. or offer explanations. Don’t talk to your C.O. about what happened at all. Don’t talk to anyone about what happened other than the best military attorney you can hire.  Remain calm, maintain your military bearing, follow orders, and stay quiet.

It is possible you could be placed under pretrial confinement during this period. In the next post, we’ll look at the circumstances that would lead to confinement and what you should do if you’re imprisoned or confined.

The time to hire an attorney is not when the trial starts: it’s now, during the crucial pre-preferral period when so much is at stake. A good military defense lawyer will ensure your rights are upheld, and your interests are protected. They will stay in regular contact with you and provide informed counsel, and be upfront and honest with you about your situation. Call Capovilla & Williams at (404) 496-7974.