Why Independent Investigations Are Critical in Military Criminal Cases 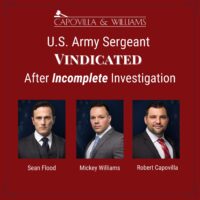 Our firm recently represented an E-5 SGT stationed at a well-known Army base in the United States.  He was charged with a serious crime related to sexual misconduct.  Even though this dedicated serviceman’s career, benefits, and reputation were at stake, CID refused to interview the key witnesses who were present at the time of the alleged assault.  Their reason was that they could not locate the witnesses, which is an amazing claim considering those Soldiers were active-duty during the time of the investigation.

Unfortunately,  our military defense law firm sees this a lot, and it illustrates just how important a thorough and independent investigation can be to the defending both minor and serious charges brought by Command.

Why don’t those responsible for conducting investigations in the United States military do so prudently?  We generally find one or more of four reasons:

In the above case, attorney Sean Flood from our office lead an investigation into the charges against our client.  In just three days, he collected witnesses statements and provided them to the Brigade Commander and the Commanding General.  Because of this work, our client was retained and will be able to continue serving his country.

What this case shows is that more needs to be done to protect our service members, and CID should be held accountable for conducting a biased, incomplete, and unreliable investigation. We salute the command for doing the right thing in the end, but encourage all those in the Armed Forces to hire independent legal representation if they are accused of a crime to ensure that a complete investigation is conducted and their rights are protected from start to finish.