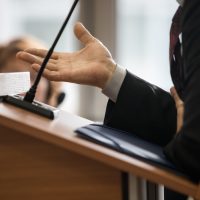 Your attorney has argued your case, presented the evidence, examined and cross-examined the witnesses. Now it’s time to bring it all home in the closing statement. The stakes couldn’t be higher.

When I prepare a closing statement, I follow four principles to make sure I’m delivering the most logical, persuasive argument possible. This post outlines the first two principles; the next one explains the last two.

One caveat before we begin: Logic won’t matter, and the panel won’t be persuaded, if they don’t see your attorney as credible—straightforward and well-informed, confident but humble, and delivering on promises. Credibility is king. Closing statements have to both rely on and reinforce your attorney’s credibility with the panel.

Principle 1. Develop The Theories of the Case

Like a great novel, everything in a great closing statement connects with everything else. When I begin my closing statement, I develop my original theories of the case with the facts and information brought out during the trial. I keep everything carefully organized and easy to follow, so the panel will remember all the key points during their deliberations.

If my first theory of the case is that the accuser was motivated to lie about sexual assault because she wanted to save her marriage, this is how I might develop this theory for the panel:

PFC Jane’s husband testified that he was furious when he found out about his wife’s alleged affair. Immediately after seeing the text messages, he told PFC Jane that he wanted a divorce. After he made that threat, for the very first time, PFC Jane claimed my client assaulted her. Ladies and gentlemen, PFC Jane has a motive to lie. Her story is tainted by her desire to save her marriage, and now my client stands before you charged with a crime he did not commit.

Your attorney’s closing argument will focus on the strengths of your case, but they should spend a few moments addressing its weaknesses as well. Owning your mistakes and talking about them can rob the prosecution of some of its firepower, and candid disclosure feels honest and trustworthy to the jury.

I recently had a trial where the accuser sent my client a message accusing him of raping her. My client responded like this:

“OMG….I’m so sorry. I would never have done that if I was sober.”

“Please don’t tell people that I raped you. It could ruin my career.”

“I never meant to hurt you. I was just so drunk. I promise that I’ll never drink like that again.”

The government has argued that my client admitted to sexually assaulting his accuser. In fact, they have based their entire case on a few messages sent from my client the morning after the alleged assault. Let us talk about these messages together, as honestly as possible. My client is a 22-year-old airman. He has been told in briefings, time and again, that it is sexual assault to “hook up” with a fellow airman who is drinking. He knew that his accuser loved attention and drama. He knew that regardless of what he said, his accuser was going to claim my client sexually assaulted her. He was terrified. In light of all the evidence you have now seen, you must ask yourself, are those the text messages of a guilty man, or are they simply texts from a scared young person?

After I develop the theories of the case and address its weaknesses, I remind the panel about the burden of proof and ask rhetorical questions designed to make the panel see the case from my client’s perspective. This is the topic of the next post.