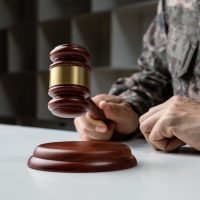 An accusation of sexual (or other) misconduct by an active-duty service member kicks off a series of actions: your personnel file is flagged, essentially putting your career on hold; you may be placed in some form of restraint or confinement; and the investigation of the allegation begins.

If military investigators conclude that the accusation has merit, the next step is the preferral of charges. This is the process whereby you are officially charged with a court-martial offense.

Usually, your commanding officer will be the person who prefers the charge against you. After swearing an oath before a judge advocate that they have investigated the allegation and believe it to be true, the C.O. signs a form DD-458 outlining the charges. You will receive a copy of the signed charged sheet.

Your attorney will need to review the charge sheet carefully. If the C.O. has not investigated the accusation against you and does not know the facts of the case, or has indicated to you or others that they doubt the veracity of the allegations, your attorney can file for a dismissal of charges.

The signed DD-458, along with supporting evidence, is forwarded up the chain of command until it reaches the officer with the authority to convene a court martial. There are three kinds of court martial:

▪ Summary Courts-Martial: Only the most minor violations are tried in this court, and the process tends to move quickly. Punishments tend to be brief confinement or restriction, hard labor, or a reduction in pay.

▪ General Courts-Martial: These are for the most serious cases—including sexual assault. Punishments from this court can include dishonorable discharge or long-term confinement. The convening authority is usually a flag officer. General Courts-Martial require an Article 32 hearing, the subject of the next post.

Failure to properly support the recommendation for court martial, or the appearance of undue influence on that recommendation, can result in a dismissal of charges, so have a competent attorney review your charge sheet and all supporting documentation.