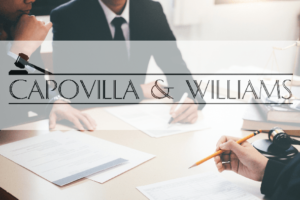 Very proud to announce that Capovilla & Williams earned a full acquittal yesterday in a General-Courts Martial in the United States Army. Our client was an 18-year veteran of the U.S. Army, a husband, and a father. He was initially accused by several different accusers of inappropriate touching.

After a motions hearing, the Government dismissed one specification and the judge ruled that there was insufficient evidence to use two of the other allegations as propensity evidence. Our client was not even in the same state as these accusers when they alleged that he committed these offenses. We were able to produce his orders that showed at the time of the alleged incident he was more than 300 miles away in a different state.

After 13 months of litigation, trial was held yesterday for the remaining accuser. My co-counsel and I were successfully able to impeach the accuser 5 or 6 different times, and we called several character witnesses who testified that the accuser was not an honest person. Proud to say that today my client is at home with his family and his retirement is in tact.

I also want to say that I felt the military prosecutors handled themselves with incredible professionalism and tact.