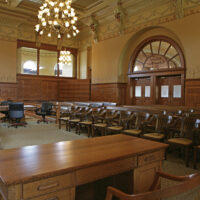 If you are a military service member and accused of sexual assault you most certainly will be facing a general court-martial.  This means that you are entitled to a preliminary hearing called an Article 32 hearing. The law provides:

“No charge or specification may be referred to a general court-martial for trial until completion of a preliminary hearing.”

The official purpose of the Article 32 Hearing is to determine the following: (1) whether the specification alleges an offense; (2) whether there is probable cause to believe that you, the accused, committed the charged offense; and (3) whether the convening authority has court-martial jurisdiction over you and over the charges you are accused of committing.

But who presides over an Article 32 Hearing?

There is no judge at an Article 32 Hearing. Instead, the case will be assigned to a preliminary hearing officer (PHO).  The PHO is most often a judge advocate who is supposed to be an impartial officer. This officer is typically an 0-3 or 0-4 who should not have any prior knowledge about the case. Typically, the PHO works in the same office as the military prosecutor and works for the same staff judge advocate who recommended that charges be preferred against you. This can be problematic, and the best defense attorneys will uncover any personal relationship with the PHO and trial counsel.

It may even be appropriate for your defense attorney to voir dire the PHO (i.e. question him/her) about his/her role, relationship with trial counsel, or any other issue that may lead to unfairness. A PHO can be considered partial and should be disqualified if it can be shown that he/she:

In addition, the PHO must be a judge advocate if you are charged with sexual assault. The PHO must also be equal or senior in grade to the detailed military counsel for both the Government and the defense, if practicable. This rule is designed to ensure that a PHO who may be a CPT is not influenced by the rank of a Major or LTC who is advocating for one side or the other.

It goes without saying that the PHO in your case matters.  And the best military defense lawyers will take all necessary steps to ensure that person is capable of conducting a fair and impartial Article 32 Hearing.