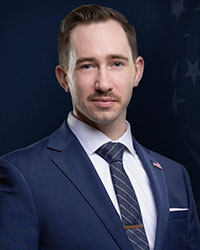 Josh brings extensive experienced to the firm gained from years of work at the busy Fort Gordon JAG Office where he served as the Non-commissioned Officer In Charge of Trial Defense Services.  During his time at Fort Gordon, Josh not only assisted in defending dozens of courts-martial and hundreds of Article-15 hearings and separation actions, but also earned several early promotions in rank and oversaw the work of service members who outranked him.

“Unparalleled trust was given and expectations were far exceeded; the best paralegal professional I have had the opportunity to work with.”

“SGT Conklin was depended on by all attorneys who worked with him for his knowledge of the military justice system and interest in the law.”

Josh earned his Juris Doctor from the St. Louis University School of Law where he helped found the Law Students for Veteran Advocacy, an organization dedicated to raising funds and awareness for local veterans in need of financial and emotional support.  Prior to law school, Josh completed his bachelor’s degree in legal studies at the University of Providence.

Josh believes that today, more than ever, service members need both a voice in their defense as well as dedicated and skilled legal representation to ensure due process and a fair result.

“For many service members accused of a crime, or really any misconduct, it can seem that the world is against them.  Our firm is completely dedicated to making certain the truth is uncovered and those dedicated soldiers, airmen, marines, and guardsmen have every opportunity to clear their name and resume their careers.”