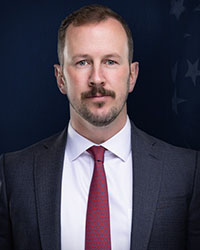 Dan Higgins is an award-winning military defense attorney with a proven record of success on behalf of service members facing serious allegations of misconduct.  He has represented clients in all branches of the armed forces in separation boards and courts-martial in high-stakes cases involving sexual assault and harassment, drug distribution, failed urinalyses, fraternization, fraudulent enlistment, domestic violence and child abuse, among others.  In the past 12 months alone, Dan has won at trial, secured victories in nine separation boards, and secured dismissals in 11 other cases at over a dozen military installations in the United States and overseas.*

A former Ranger, Dan served 10 years in the United States Army in a variety of leadership positions in the infantry and special operations. These included service as a Sniper Team Leader, Rifle Platoon Leader, and Logistics Officer in units such as the 3rd Infantry Division, 4th Infantry Division, 75th Ranger Regiment, and 19th Special Forces Group.

Dan credits his passion for defending those who wear the uniform to his time as an NCO and an officer, witnessing truly great leaders take care of their troops, and believes that those who put it all on the line for our country deserve all the rights and privileges afforded by the Constitution.

“I believe justice transcends politics or whatever policy is trending at the moment. The reality is service members are falsely accused of crimes every day. It happens. And in this current environment, it leaves the accused in a very vulnerable state. They are ostracized and shunned and treated as guilty until proven innocent. Commanders often fail to take a stand against these allegations, regardless of their merits, and subsequently, service members’ careers and lives hang in the balance. And that’s where we come in. We thoroughly investigate, track down every witness, scrutinize every detail, every statement, every piece of evidence to ensure we are as prepared as humanly possible before we ever step foot in the courtroom. That’s our commitment. We owe that to every client. And I take that commitment very seriously.”  – Dan Higgins

Dan earned his Juris Doctor from the Mercer University School of Law, Master of Arts in International Relations from the University of San Diego, and Bachelor of Arts in Political Science from Pepperdine University. While in law school, he founded and led the Mercer Law Criminal Defense Association and worked for the Fulton County Public Defender’s Office and the Federal Defenders of the Middle District of Georgia.

Dan is licensed to practice in all U.S. Military Courts as well as all federal and state courts in Georgia.  In 2022, he was recognized as one of Georgia’s “Legal Elites” by business and politics magazine, Georgia Trend, an honor based solely on the voting of other attorneys.

Army E-5 accused of sexual harassment and other crimes at Fort Bragg.  Result: Not guilty of all charges at trial.

Navy E-5 accused of sexual assault at Jacksonville Naval Air Station.  Result: Not guilty of all charges at trial.

Army E-7 accused of sexual assault and other crimes at Fort Stewart.  Result:  Retained at Separation Board.

“Dan was remarkable! Not only was he professional and patient, but he was proficient when it came to the law and on target in every aspect when it came to defending me! He is definitely a weapon you’d want in your arsenal (and in the courtroom)!”

“I was facing serious allegations from the army that could of changed my life in a very negative way. I turned to Capovilla & Williams for help. Where I worked with Dan Higgins and his team for 14 months. They helped me with every step when TDS wasn’t. Dan Higgins proved my innocence at a separation board, where everything was unfounded I was able to stay in the army. Where I am able to still get a honorable and move on with my life.”

“I want to thank Daniel Higgins for getting my case dismissed! I was falsely accused of DV in early July. Being in the military my career was on the line, but Mr. Higgins representation and determination to clear my name was of his highest priority. Definitely an easy person to talk to, and was always accessible whenever I had a question or dilemma. Thanks again!”

* The information on this page and throughout this website is not intended to be a guarantee of a particular result in a specific case or legal matter and is intended only as a representation of the attorney’s work.